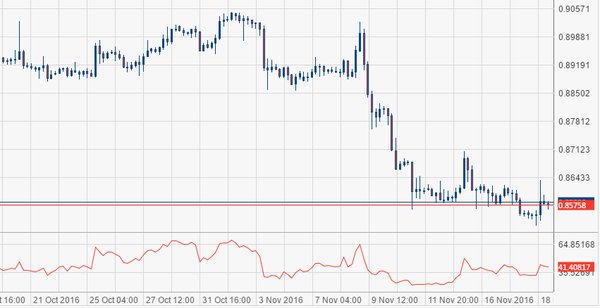 After the US election the euro is suffering against the Dollar, while this “Trump-effect” is much more moderate on the pound. To be precise, in the first few days after the vote, the British currency has even recovered. Probably we could find the main reason of this movement not in the Trump’s election, but in the High Court sentence (released at the beginning of November), which is enforcing Theresa May to go to the Parliament before invoking Article 50. The markets quickly understood that this could make the so called “hard Brexit” much further than expected.

From a technical point of view, the area 0.855-0.853 looks a first important dynamic support area, with the short trend that still appear bearish (positive for the pound), even if some indicators are showing signals of reversal patterns. We will have a first positive signal only if prices could return above 0.87.